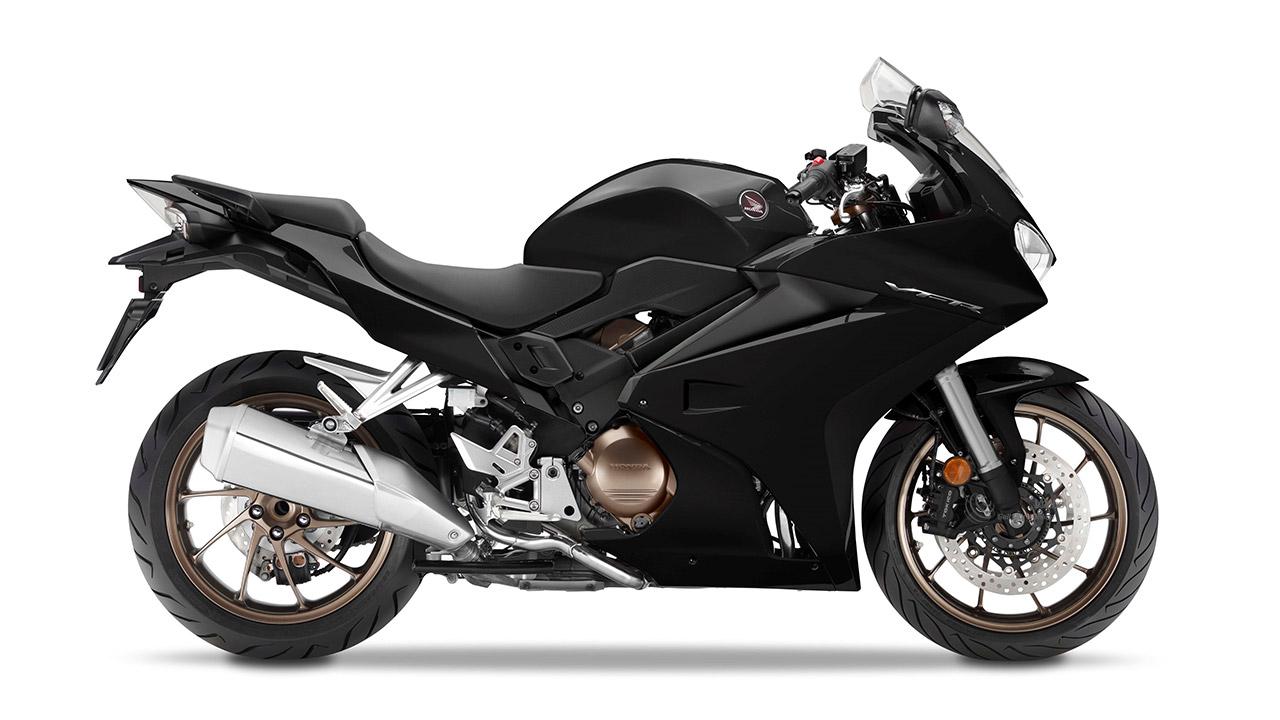 The V4 engine configuration is a special one for Honda, going back nearly 40 years. A complex, yet compact unit, it has a unique power delivery and a soul all its own. Honda’s current RC213V MotoGP machine uses a V4, as does the flagship sport-touring VFR1200F. It’s a powerplant woven tightly into Honda’s engineering DNA.

And nowhere has the V4 engine been more at home than in the legendary VFR800F series – a truly all-round motorcycle that’s always done sport as well as it tours, and all areas in between, with or without a pillion. It has inspired huge loyalty among owners over the last two decades and it’s estimated there are still 75,000 VFRs in regular use across Europe.

The legion of VFR800F fans know exactly what they like about their bike, what they’d like more – and less – of in a new model. With such an important model Honda has listened intently to customers’ views; in essence they want a high-quality motorcycle with strong low and mid-range torque, light and slim but just as capable and adaptable, with a return to the evocative look and feel of VFRs of the past.

Two factors were key drivers for Honda’s engineers in development of the new VFR800F for 2014 – firstly, to retain and expand the essential VFR qualities that inspire so many, and, secondly, to update the new model with modern features and technologies.

Starting with the 782cc V4-VTEC engine, bottom and mid-range power were boosted, to strike the ideal balance of enjoyable sports riding and easy commuting. The VTEC transition was softened resulting in a smooth, strong and linear power delivery. Honda’s TCS (Traction Control System) was also added.

Extensive work went into making the new VFR800F lighter than its predecessor, a whole 7kg lighter in fact. A single exhaust muffler replaced the dual underseat design of the previous model and a host of detail changes saved weight.

And then there’s the styling. Considerably slimmer in the middle than the outgoing bike the 2014 VFR800F mixed a sleek silhouette with crisp, contemporary angles – and more than an echo of classic VFR design. For 2017, the VFR800F will be available in three colours:

The VFR800F’s 782cc, liquid-cooled 16-valve DOHC 90° V4-VTEC engine has received significant development for 2014 – mainly focusing on cam timing and valve duration/overlap – to deliver the required increase in low-to midrange power and torque. Peak power of 77.9kW is delivered at 10,250rpm, with peak torque of 75.1Nm arriving at 8,500rpm.

VTEC valve timing operates one pair of inlet/exhaust valves per cylinder at low rpm, and then switches to four as revs rise, with a seamless transition between the two. Combined with the uprated torque, the change resulted in a remarkably linear power delivery and effortless overtaking at highway speeds.

Bore and stroke is 72mm x 48mm, with compression ratio of 11.8:1. The PGM-FI fuel injection – with 36mm throttle bodies – was remapped to suit the engine’s new performance parameters, and fuel economy is 19.4km/l (WMTC).

Honda’s Traction Control System (TCS) is fitted as standard equipment. It’s operated from the left handlebar and a single mode covers a wide variety of riding conditions and situations.

For 2017, the engine is EURO4 compliant. The allowable limits for exhaust tailpipe pollutants such as carbon monoxide, hyrdrocarbons and nitrous oxide specified by EURO4 are approximately half of those for EURO3.

The diamond triple-box section aluminium twin-spar frame was unchanged for 2017; a revised die-cast aluminium subframe saved significant weight compared to the previous model. In total, kerb weight was reduced by 7kg to 242kg. Rake is set at 25°30’ with trail of 95mm and 1,460mm wheelbase.

‘Elegant Sport’ is the essence of the VFR800F and its stunning bodywork not only provides a contemporary outline, with a mixture of sharp angles and soft curves, it pays respect to design elements from the VFR’s history – details like the small air intake duct on the fairing’s flank.

The VFR-signature ‘X’ headlight shape was updated for 2014 to feature LED lights – a first for Honda. Positional lights were integrated with the wing mirrors, just like the VFR1200F. At the rear, the wide, angular tailpiece offers plenty of room for a pillion and features an LED rear light unit with combined indicators for a clean look. With fuel economy of 19.4km/l (WMTC), the 21.5-litre fuel tank offers a 350km plus cruising range.

At 500mm the width around the middle cowl was reduced by 40mm giving the VFR800F a slim and compact feel. The seat is height adjustable (789mm or 809mm) using the tool provided and a handlebar height spacer, adding 15mm is available as a Honda Genuine Accessory.

Unique to Honda is the VFR800F’s self-cancelling indicator system. Rather than using a simple timer it compares front and rear wheel speed difference and calculates when to cancel the indication relative to the riding situation.

The dashboard houses a digital speedometer/tachometer plus gear position indicator, ambient temperature gauge, fuel consumption information and clock. There’s also an indicator for the 5-stage heated grips, which are fitted as standard. A compact automotive-style ‘wave’ design key – with internal grooving – reduces the chance of breakage. For 2017, a new DC charging socket adds another element to the premium specifications. 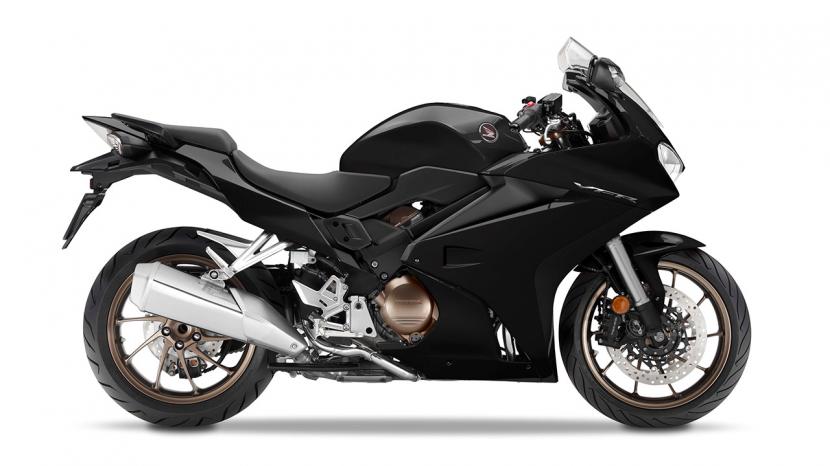 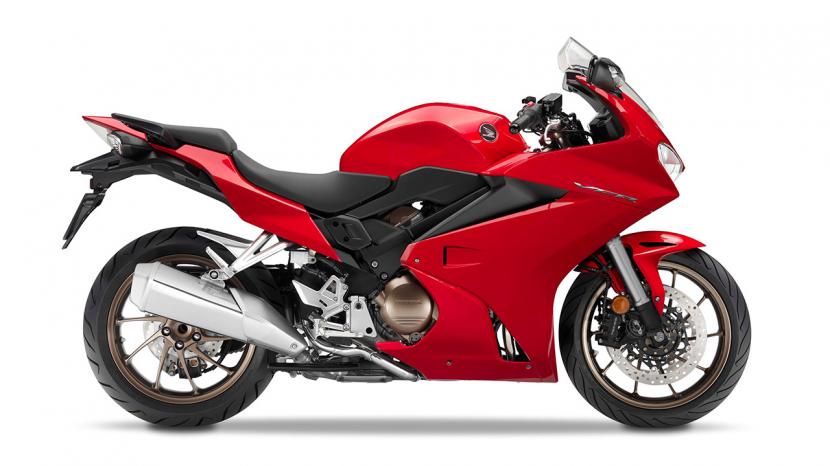 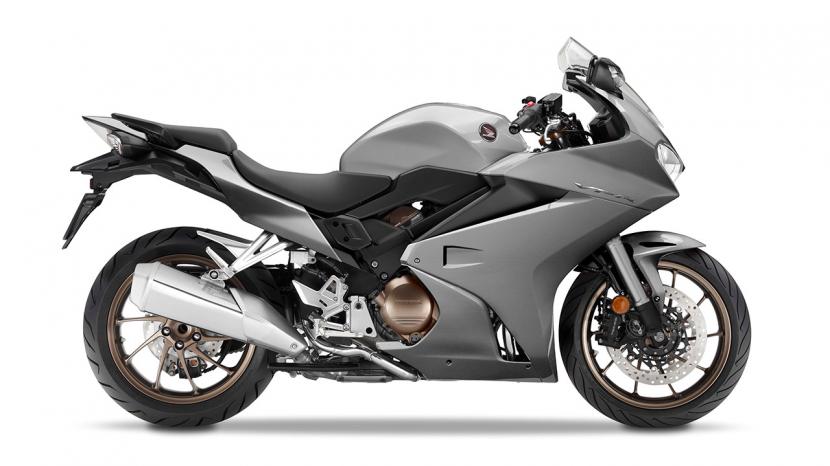 In order to reserve this Honda VFR800F, you can place a fully refundable deposit of £99. Simply click on the the button below to proceed via a secure, one time and fully refundable payment of £99.

Please note that placing a deposit doesn’t guarantee model availability, we’ll contact you to confirm your sale or to issue a refund if your chosen model is unavailable.

Get the latest news and offers straight to your inbox

Rider Motorcycles Limited trading as Wheels Motorcycles and Wheels Honda is an appointed representative of ITC Compliance Limited which is authorised and regulated by the Financial Conduct Authority (their registration number is 313486). Permitted activities include advising on and arranging general insurance contracts and acting as a credit broker not a lender.

We can introduce you to a limited number of finance providers. We do not charge fees for our Consumer Credit services. We may receive a payment(s) or other benefits from finance providers should you decide to enter into an agreement with them, typically either a fixed fee or a fixed percentage of the amount you borrow. The payment we receive may vary between finance providers and product types. The payment received does not impact the finance rate offered.

All finance applications are subject to status, terms and conditions apply, UK residents only, 18’s or over, Guarantees may be required.